Over recent decades, counterfeiting has been causing serious harm, not only to the global economy but also to consumer health and safety. The huge, quickly generated profits made from illicit trading (comprising counterfeiting activities) has encouraged counterfeiters to find new ways to evade the detection and restriction of their illegal activities and to speedily adapt to changing circumstances. Booming e-commerce, the intensive use of social media platforms and most recently, the Covid-19 pandemic, have all driven the counterfeiting issue to become a critical concern. 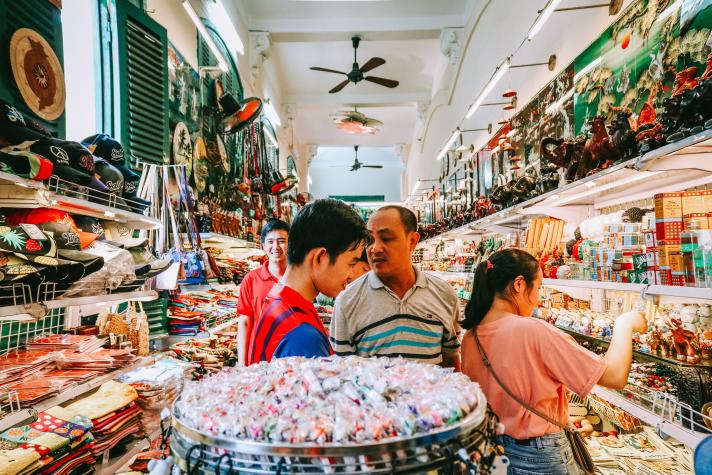 In a report published in 2019 by the Organisation for Economic Co-operation and Development (OECD) and the European Union Intellectual Property Office (EUIPO)[1],  half of countries in South-East Asia (SEA), such as Singapore, Thailand, Malaysia, the Philippines and Vietnam, are listed among the top 25 economies for the provenance of counterfeit and pirated goods between 2014 and 2016. In this article, we will take a look at how counterfeit trading activities are evolving in SEA as well as the explicit and implicit consequences on human health of using counterfeit products.

In many areas in the world, including the South-East Asian region, the Covid-19 outbreak has caused the authorities to apply strict restriction measures, such as lockdowns, social distancing, working from home, etc. During the crisis, online shopping has become an efficient way to fulfil people’s need. E-commerce platforms, including Shopee, Lazada and Tokopedia, or social media platforms, such as Facebook, TikTok and Instagram, are popular places where people make millions of orders every day. A joint e-Conomy report in 2020 by Google, Temasek and Bain emphasised significant changes in the digital life of the region: 36% of digital consumers were new to the online services due to Covid-19 and 94% of them intend to continue using digital services going forward[2].

Moreover, the Covid-19 crisis caused a sharp slowdown in the 2020 GDP growth of major countries such as Indonesia (-2.1%), Malaysia (-5.6%), Myanmar (-10%), the Philippines (-9.6%), Singapore (-5.4%) and Thailand (-6.1%)[3]. Given the current environment of uncertainty and fear, and the real threat of significant declines in income, many consumers are now unable to purchase branded goods and services. Consequently, buying cheap counterfeit products is a tempting option for consumers with low budgets.

Amid the chaos, counterfeiters have promptly taken advantage of the new situation and, unfortunately, they are often one step ahead of authorities and policy. Recently, an overwhelming number of counterfeits being sold on e-commerce sites, social media platforms and dark-net markets have been detected, warned about, and reported by authorities, brand owners and consumers.

For instance, according to the IP Violation Reports from the Intellectual Property Office of the Philippines (IPOPHL), from January to September 2020, IP complaints lodged at the IPOPHL increased to 135, surpassing the total of 129 complaints received in the previous 5 years (from 2015 to 2019)[4]. Among those, the majority of violators were operating online.

In 2020, the General Department of Market Surveillance in Vietnam checked more than 5 000 suspected cases, uncovering about 4 500 violations. This resulted in monetary fines that came to a total of VND 30 billion (approximately USD 1.3 million). The value of counterfeit goods, and goods without a certificate of origin infringing IP rights, recorded in the first 7 months of 2020 by this department was VND 40 billion (approximately USD 1.74 million)[5].

Furthermore, according to the enforcement statistics of the Department of Special Investigation and Customs, Royal Thai Police, the number of seized items from January to May 2021 increased by 83.33% compared to the same period last year[6].

More importantly, the Covid-19 pandemic has made people seriously anxious about getting sick. Many people stockpiled medicines, testing kits, and protective equipment (such as face masks, medical devices, disinfectants, sanitisers, etc.), causing a dramatic surge in demand for those products. During the peak crisis, global transportation was seriously affected, resulting in higher prices for raw materials. There were not enough products originating from genuine sources to meet the huge spike in demand. Consequently, broken supply chains, a strong demand for essential products, and the high level anxiety among consumers, have accelerated the surge in illicit trade and counterfeiting. ‘When the supply does not meet the demand, it creates an environment where poorer quality or fake medicines will try to meet that demand,’ said Pernette Bourdillion Esteve from the World Health Organization (WHO)[7].

A report by Check Point Research[8] revealed that there has been an alarming increase of fake Covid-19 vaccines available on the dark web since November 2020 – when the positive news about vaccine trials and the imminent availability of vaccines was released. Phrases such as ‘available corona virus vaccine $250’, ‘Say bye bye to COVID19=CHLOROQUINE PHOSPHATE’ and ‘Buy fast. CORONA-VIRUS VACCINE IS OUT NOW’ were used to tempt people into buying fake medicines. Check Point’s expert also noticed that a dark-net search for Covid-19 returned multiple results, including hundreds of advertisements – an increase of over 400% since early December 2020. 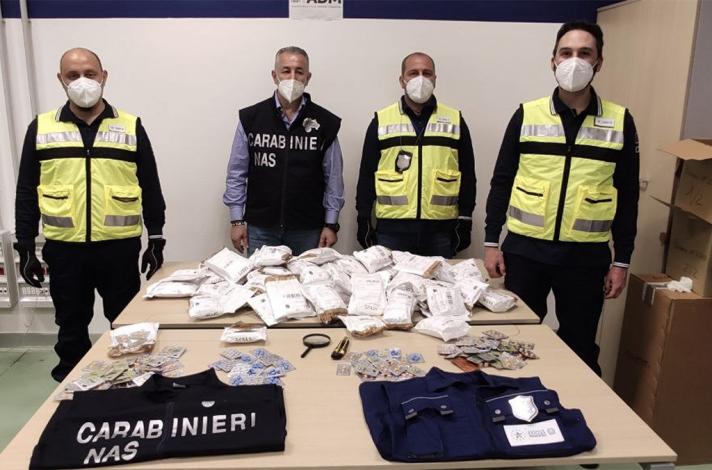 Recently, INTERPOL (with the support of local police, customs and health regulatory authorities) carried out Operation Pangea XIV in 92 countries, targeting the sale of counterfeit and illicit medicines and medical products. The operation resulted in 113 020 web links, including websites and online market places, being closed down or removed. This Operation oversaw the seizure of 9 million medical devices and illicit pharmaceuticals (fake and unauthorised Covid-19 testing kits accounted for more than half of those) and 277 arrests worldwide during one week of action (18–25 May 2021). The potentially dangerous pharmaceuticals seized during the operation had an estimated value of more than USD 23 million[9].

The health and safety consequences of counterfeits

Using counterfeit products, especially fake medicines, can cause serious harm to health and safety for consumers, as they are more likely to contain dangerous ingredients than authentic goods. Furthermore, counterfeit products usually do not go through the required consumer compliance and safety tests before being put on the market.

Recently, some alarming figures related to counterfeiting were released in the EUIPO’s Qualitative Study on Risks Posed by Counterfeits to Consumers[10]. This study clearly displays the extent of the dangers to health posed by counterfeit goods, as evidenced by the alerts submitted by EU market surveillance authorities (MSAs) using the European Commission’s ‘Rapid Alert System for dangerous non-food products’ (RAPEX system). The report concentrates on the seven most common risks reported: chemical, injuries, strangulation, choking, electric shock, damage to hearing and fires.

An analysis of RAPEX alerts carried out from 2010 to 2017 pointed out that:

With counterfeit medicines, the impact can even be life-threatening. According to a WHO study on public health and the socioeconomic impact of substandard and falsified medical products[11], many counterfeit drugs contain undeclared active ingredients that might have serious unwanted health consequences. These can pose very serious threats to consumer health and public systems, such as: 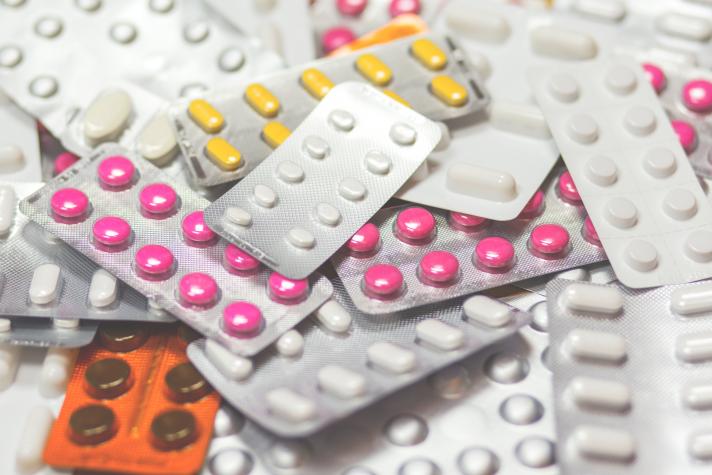 According to the report from the United Nations Office on Drugs and Crime (UNODC), many South-East Asian people are at risk as the amount spent by consumers in this region on falsified medicines is estimated to range between USD 520 million and USD 2.6 billion per year[12]. The report also pointed out that ‘some of the falsified medicines manufactured in South-East Asia involve mainstream companies that cut corners by deliberately diluting products with substitute or cheaper chemicals or by altering the expiration dates on packaging. Others are produced as the result of insufficient mixing, contamination and degradation, and other simple sloppiness, as evidenced by some samples containing more than the specified dose’. For example, during Interpol’s Operation Pangea VIII in 2015, Indonesian authorities detected that criminals were altering the expiry date or the amount of the active ingredient on packages of counterfeit, expired and unregistered medicines at the warehouse and returning them to pharmacies for sale. Other follow-up investigations in Indonesia uncovered counterfeits in 37 medical facilities across 9 provinces, including counterfeit imported child vaccines for hepatitis B, tetanus, measles and polio. More than 20 individuals, including 3 health professionals, were arrested due to their involvement in these illegal operations[13].

Illegal trading and counterfeiting have negative consequences, not only for the economy (decrease of revenue and profits, erosion of brand confidence and reputation) but also for consumer health and safety. The boom of e-commerce and the extensive use of social media platforms, along with the recent Covid-19 outbreak, have been creating fertile ground for the production, distribution, and consumption of counterfeit products. To tackle this threat, continuous actions, efforts, and financial resources are required from the authorities, agencies, and IP owners to track, monitor and stop the illegal activities of counterfeiters.

But above all else, it is the responsibility of the consumer to adopt a wise attitude and to avoid buying and using counterfeit products. Purchasing counterfeit goods may instantly save some money, but paying with our health means a higher cost for all of us.

For more information about IP in South-East Asia, check out our website at https://intellectual-property-helpdesk.ec.europa.eu/regional-helpdesks/south-east-asia-ip-sme-helpdesk_en.

The South-East Asia IP SME Helpdesk is an EU initiative that provides free, practical IP advice to European SMEs in relation to SEA. EU companies can send questions to question@southeastasia-iprhelpdesk.eu and will receive replies within 3 working days.